I honestly cannot believe that my three years at university are officially over! I know everyone says it and it’s a cliche and all, but where did the time go? It’s definitely been a rollercoaster ride with some real downs but some very good highs, and I’d do it all again if it meant I could meet some lovely people like I did in Northampton (I know, cringe!)

My graduation ceremony was held this Friday just gone (21st July) which was a very special day for my family, and it just so happened to be my parent’s wedding anniversary as well! It was held at the university’s main campus – Park Campus and the ceremony itself was at the Royal & Derngate Theatre, where it is each year. The day was all go go go, I don’t think I properly sat down to take in the importance of the day until I got home later on.

The graduation for the Humanities and Education subjects (English for me) was held in the afternoon at 2.30pm but there were plenty of other things to do before that. We had to arrive a few hours in advance so that we could fit in all the preparations ie photos and collecting gowns. It was really surreal when I arrived at the campus because I saw all these people in their gowns and hats walking around and I had that little ‘omg that’s going to be me’ moment. I had to go to the library to collect my gown and they had dedicated people to help you put them on so it felt a bit like a factory conveyor belt system!

Next, it was photography time. Another conveyor belt system – mum and dad decided to buy a photo pack that wouldn’t have frames included because we wanted to have matching frames for the pictures and my graduation certificate. The photos took seconds, all I did was stand in front of a background that looked like a library full of old fashioned books while holding a pretend scroll – photos were done!

The five of us managed to scoff down some lunch after taking a few pictures ourselves with some cute backgrounds, of course! There was a free shuttle bus (aka the bus journey from hell) from the campus to the theatre to save people trying to drive through the town centre.

Shockingly I have never been to the Royal & Derngate in my three years of living in Northampton – how uncultured of me! It is absolutely beautiful and I will definitely be going back again for any future shows. We all sat in our designated rows with our names taped to our seats which we had to take up with us on stage so it could be read out correctly. It really is 30 seconds of fame from the time you walk up, shake hands with the pro chancellor and receive your degree scroll but it is worth that out of body experience!

After the ceremony, we got the shuttle bus back to the campus for some drinks at the student union. All students got a free drinks voucher so I wasn’t going to miss out on my G&T after the busy day I had just been through! Everyone got a cute little goody bag from the uni as well with some well-needed sweets inside. 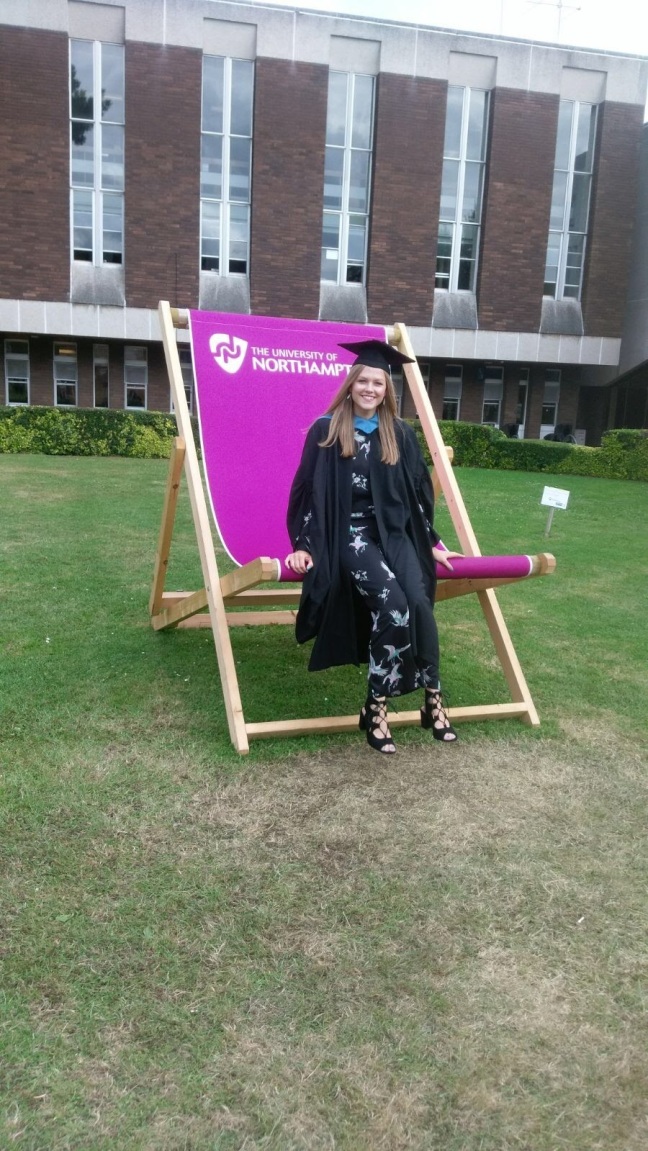 Once the events were over we bundled in the car home and had a lovely meal out at Zizzi, bring on the vegan pizza!

Then, of course, I celebrated with a girls night out which was well needed!