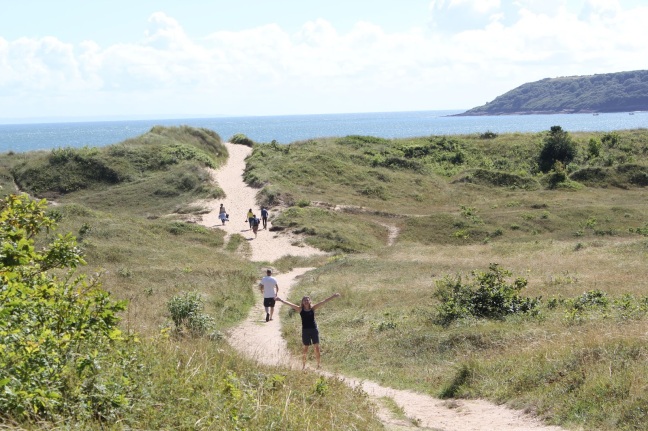 Honestly, we do go to other places besides Wales on holiday, but we just seem to have gone there a lot this year. Nicholaston Farm is a caravan and camping site based in the Gower in Swansea; my dad went there last year with some of his friends and they loved it so much they recommended we should go as a family. The main points of attraction are the wonderful stretch of beaches along the coast, Crawley and Oxwich beach were only a 10-minute walk down hill from the campsite and absolutely worth the visit.

We set off early morning for Wales on the 5th August, it normally takes around 3 hours and we made good time, arriving right on the dot for check-in. I’m not going to lie, putting up the tent is always a traumatic experience but we got there eventually!

Most of the day was spent travelling, setting up the tent and getting ourselves settled. Once ready and refreshed with some lunch, we decided to go for a quick walk to the beach. Let me just say Dad’s definition of ‘a quick walk’ ended up being a 6-hour hike! I don’t mind long walks but I was not wearing the right foot wear at all, I started off in flip flops which killed my feet so we went back to get some other shoes for my poor feet. 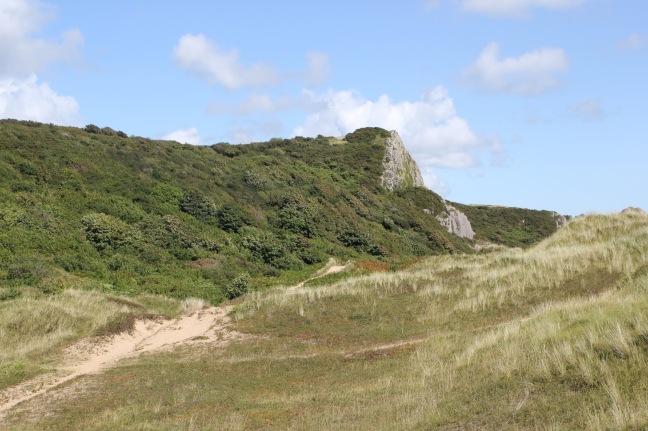 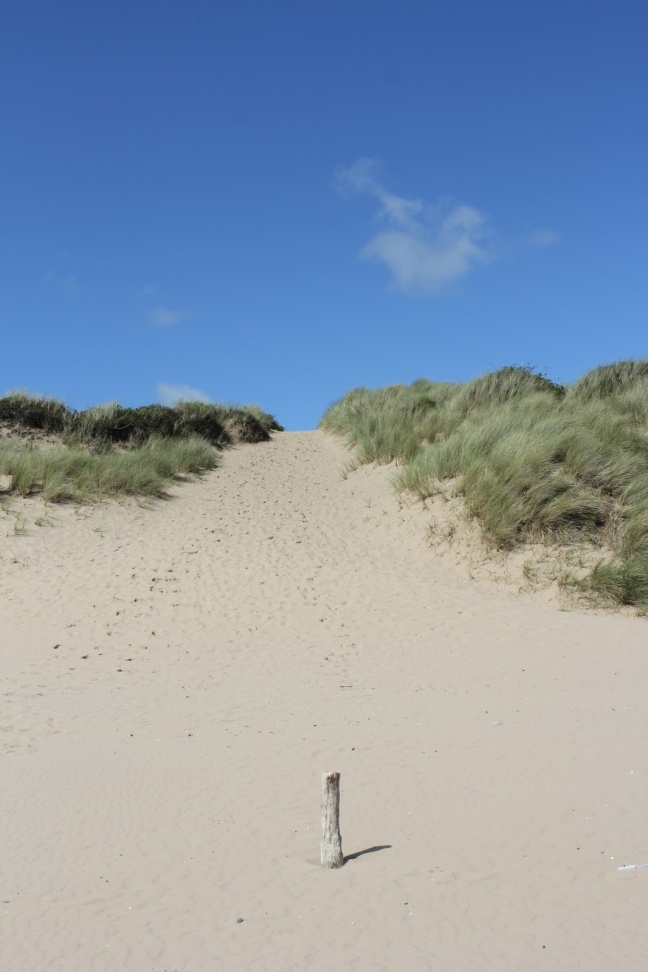 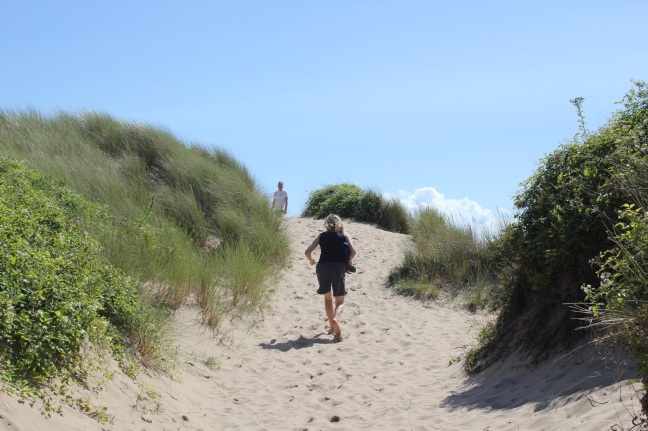 The beaches on the Welsh coast are beautiful, who doesn’t love a good sandy beach? I took so many photos on our walk to and from the beach – the second photo above was a tall sand dune and the descent ended up with us running, almost falling down the slope. 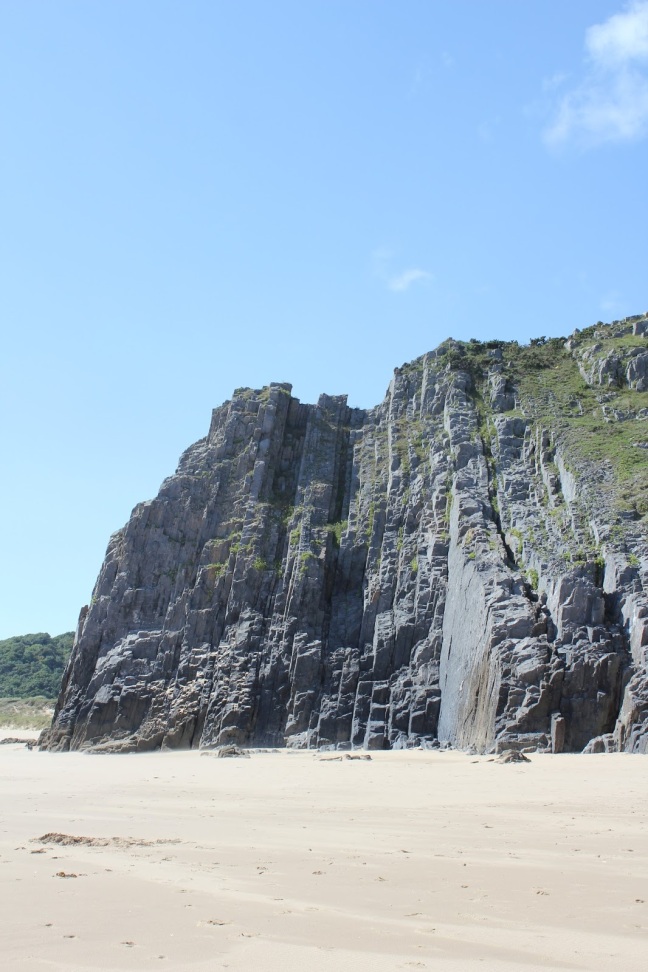 The weather was insane – a mixture of glorious sunshine and massive gales of wind were an interesting combination. It definitely made for some hilarious hair-in-face photo disasters! After a walk across Oxwich beach, mum, dad and I walked further along the coast line across the cliff edges and through fields and more sand. 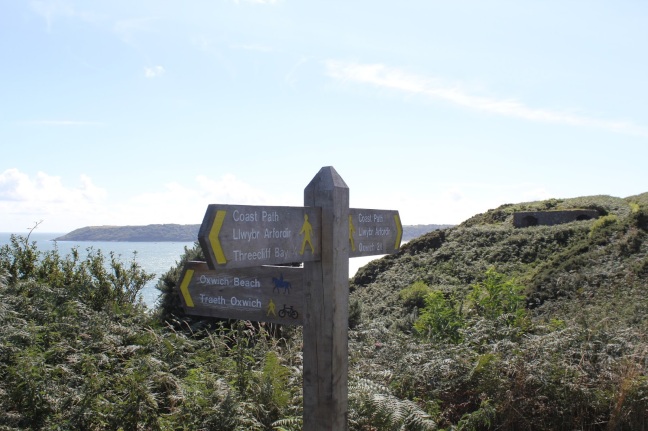 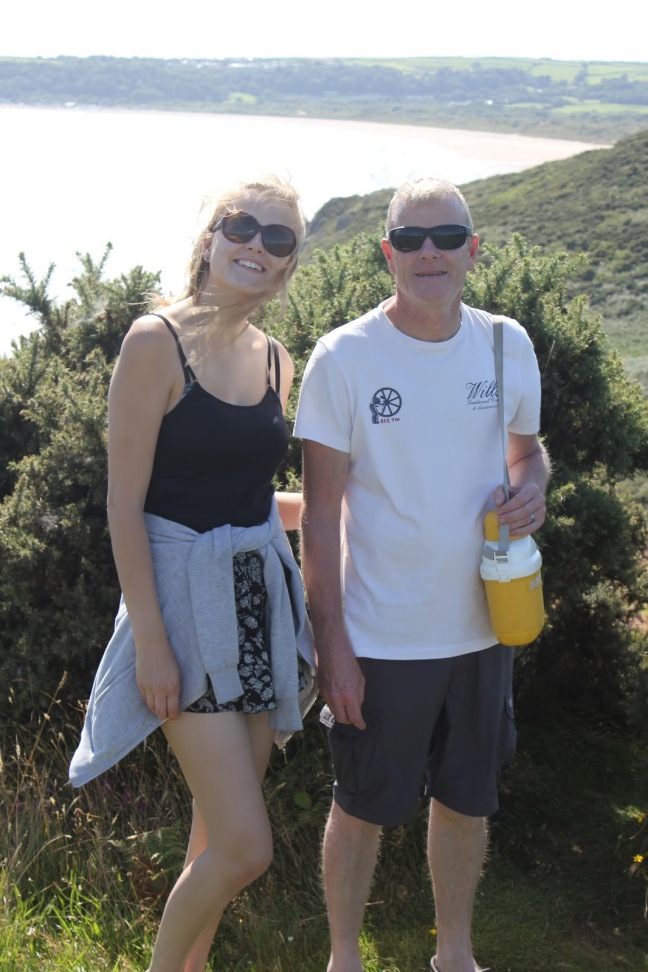 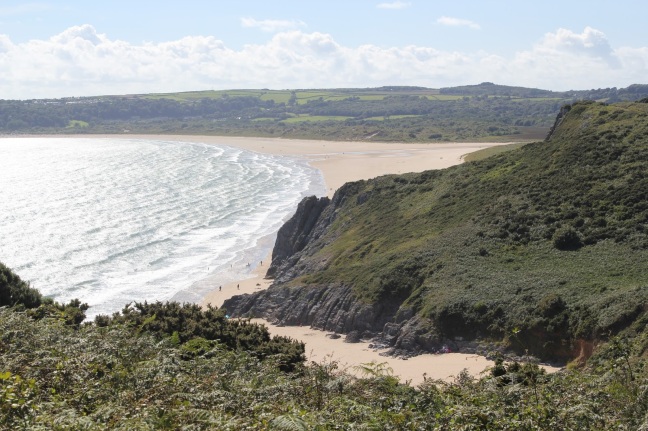 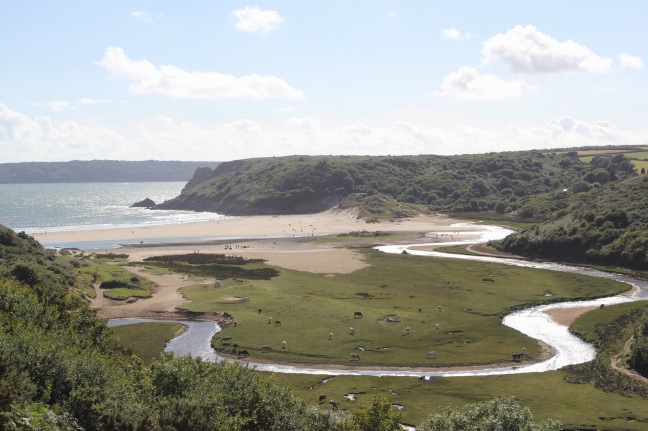 Dad has seen some seals in the sea the last time he came to visit, but unfortunately, there weren’t any when we had a look across the water. Still, I had the opportunity to get some more photographs of the beautiful scenery of the Welsh coastline. beaches and greenery.
On to our next part of the walk; we managed to find some beautiful castle ruin which was conveniently situated at the top of a very steep hill but it was completely worth the trek uphill to take in the stunning views and the remaining ruins left behind. 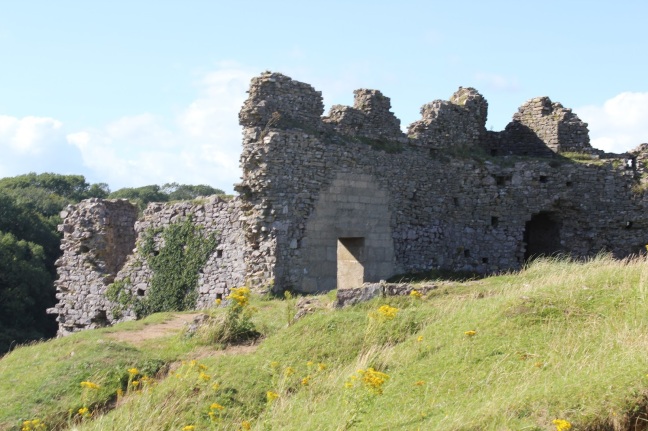 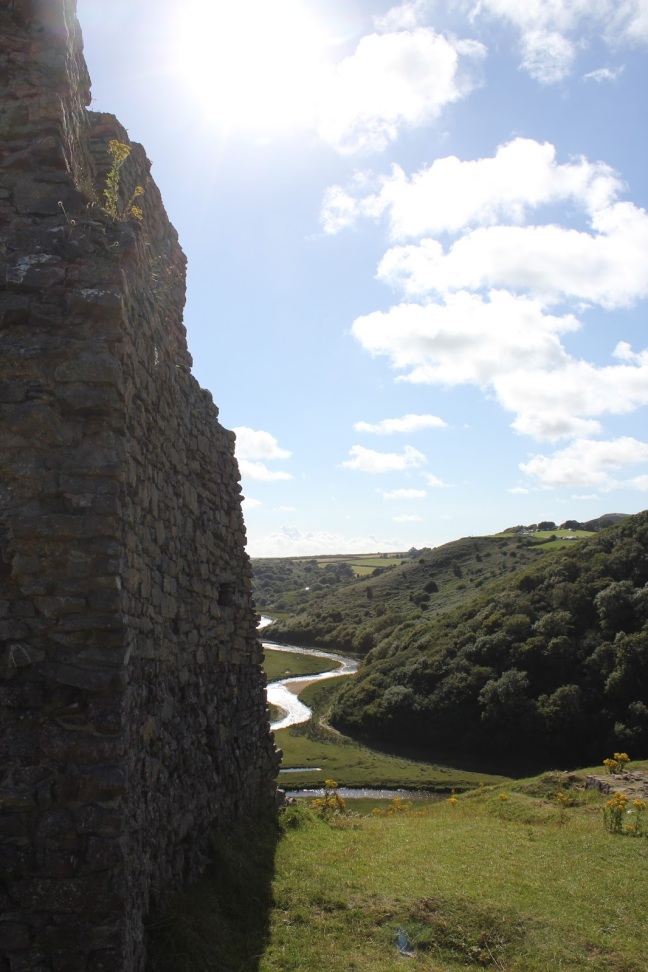 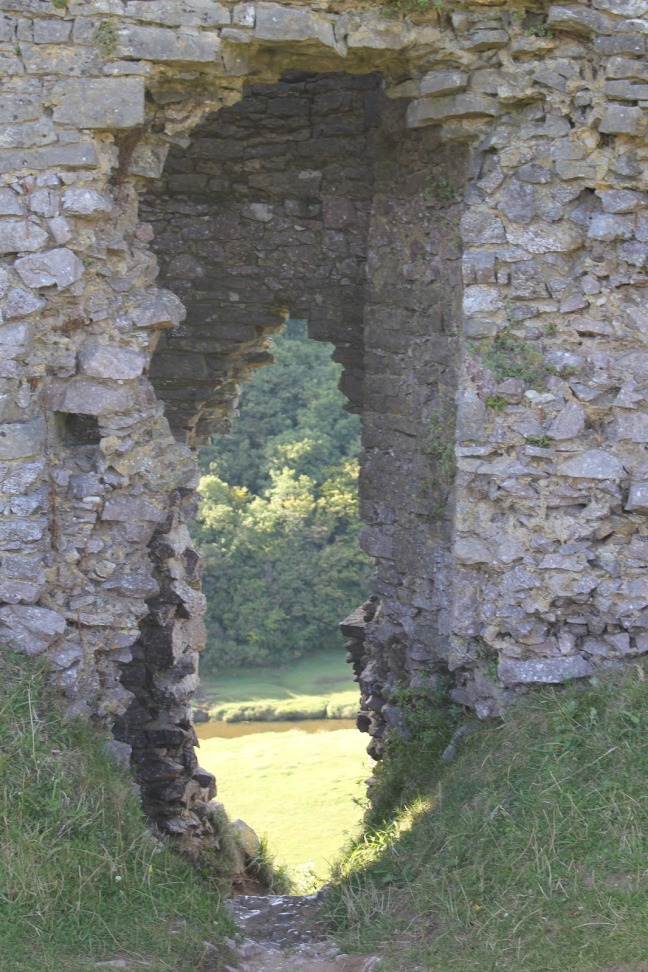 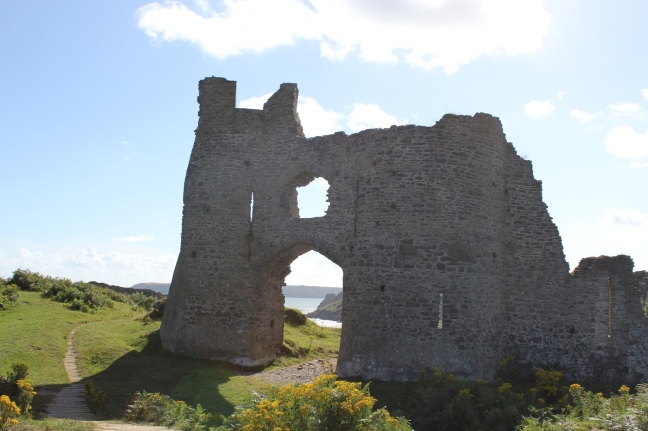 Towards the end of the walk, all of us were on our last legs so we made an ice cream/sorbet stop at a local shop. I had a scoop of blackcurrant sorbet which was so delicious and tangy, mum had orange sorbet and dad had something chocolate flavoured, surprise, surprise! 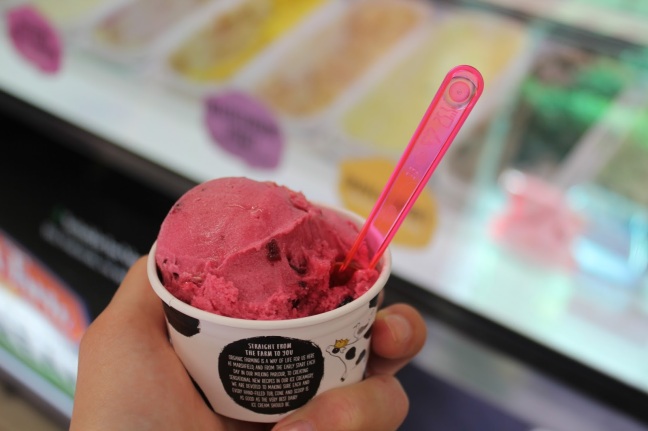 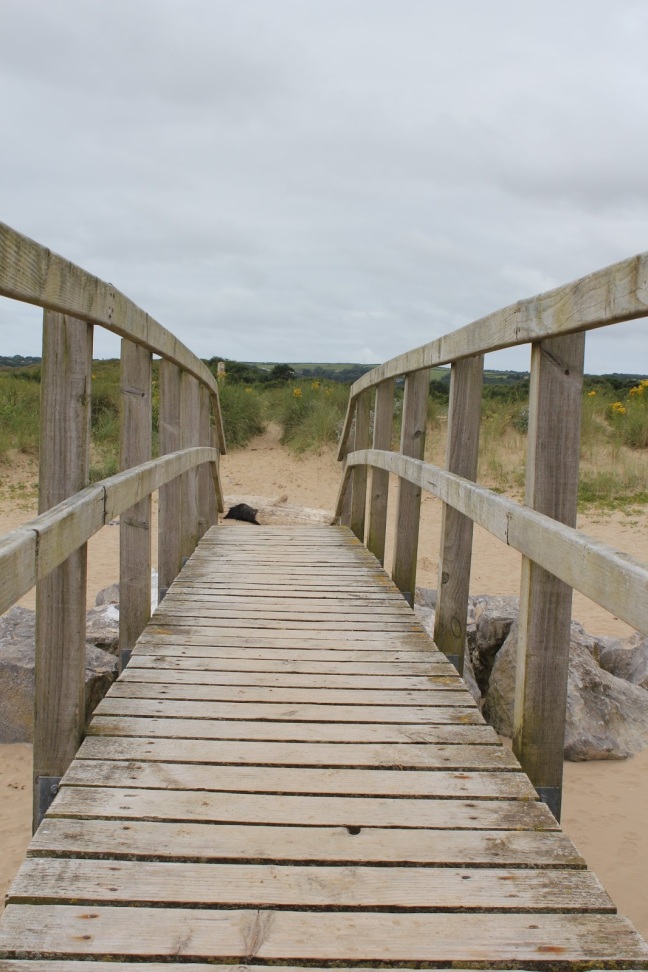 On Sunday, my auntie and uncle joined us at the campsite. They drove from Brighton so it was a fairly long drive for them especially with two dogs in the car! As soon as they had put their tent up, we all had lunch and went on a (significantly shorter) beach walk. 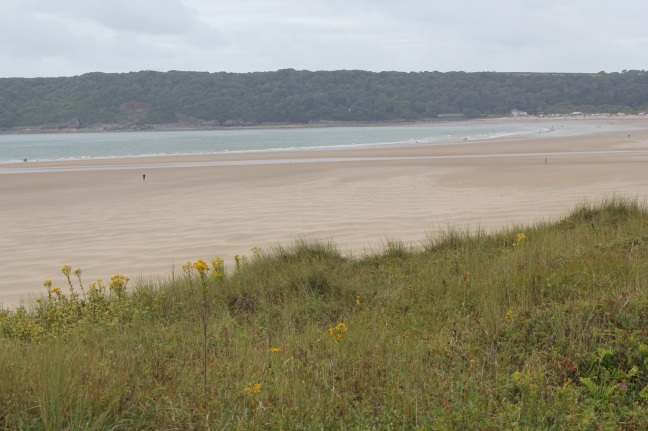 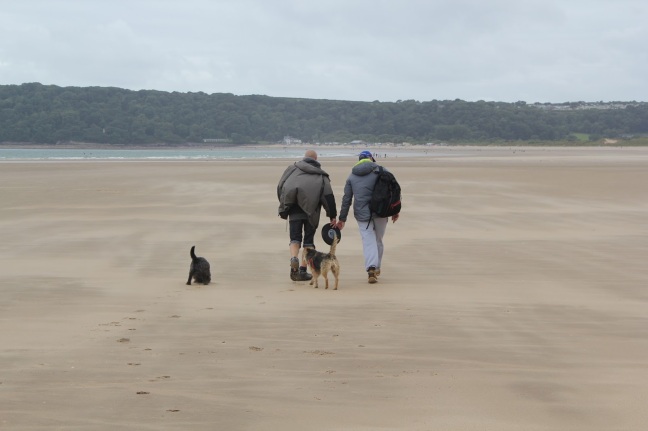 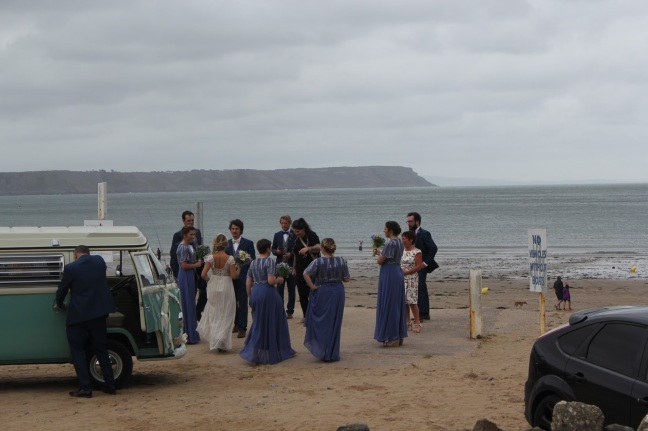 We walked the length of the bays and reached Oxwich Bay Hotel where we had a few drinks and some well-deserved chips for a late afternoon snack. We sat in the beer garden and there were a lot of people dressed smartly and we realised that there was a wedding ceremony! They got married on the beach with a VW camper van in the background and all – just a shame that the weather wasn’t the nicest.
After our refreshments, we headed back and through the woodlands to reach the campsite. My dad spotted a swing rope suspended from a tree which hung over a giant slope into the forest below. Of course, he and my uncle had to have a go… 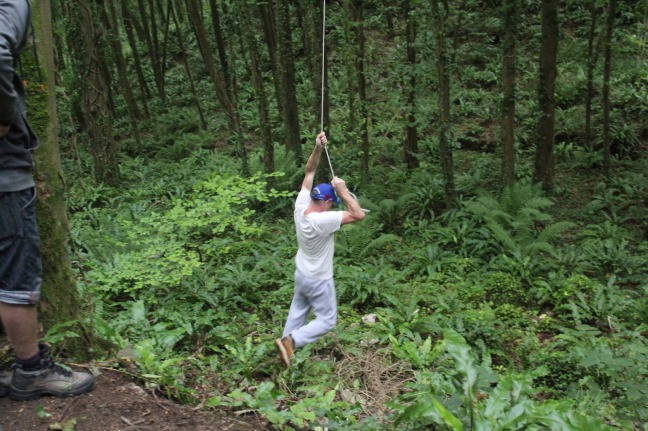 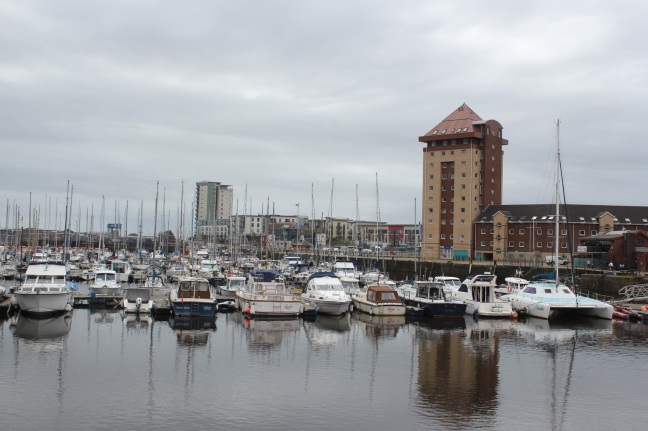 On Monday we ventured into Swansea city centre. We spent some time walking around the harbour taking about a hundred photos and I pet numerous dogs that were on their walks with owners – I couldn’t help it okay! I am trying to bribe mum and dad to get a family dog because I know how much they love dogs and I hope it’s working!!
After our wander, we went to the Dylan Thomas centre for a quick look around. We had to fit in some literature and cultural education whilst we were there of course! The five of us had some tea and cake afterwards and they had vegan lemon drizzle, day = made. 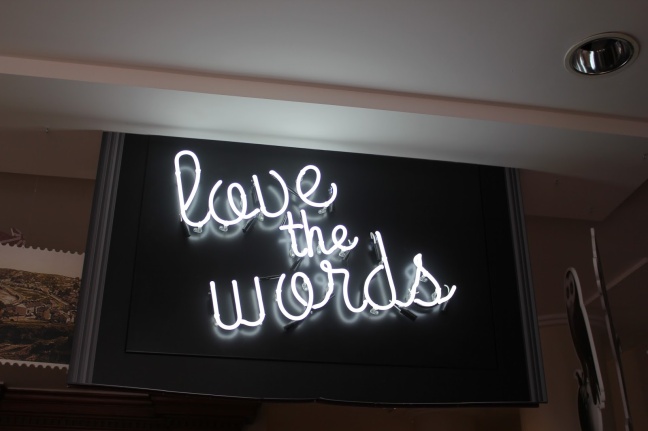 My brother joined us from home later on and we headed towards the pier. I didn’t realise how much we actually crammed into the day! The pier had a life boat centre which we had a nosey in and then headed back to the campsite. Of course, we visited the beach near the campsite again to play some French cricket and frisbee before the day was over.

Tuesday called for another day outing – to Rhossili Bay to climb to Worm’s Head. It was another place that dad had visited with his friends on his last camping trip and let me tell you, it was not easy!
We were against the incoming tide that was to come to shore in a few hours so we didn’t have long to reach Worm’s head before it was cut off by the sea, but to get to the island there were jagged rocks to climb over which was erm, fun. We got there eventually and took in the views in the sunshine and had a well-deserved rest at the summit before the hour or so walk back. 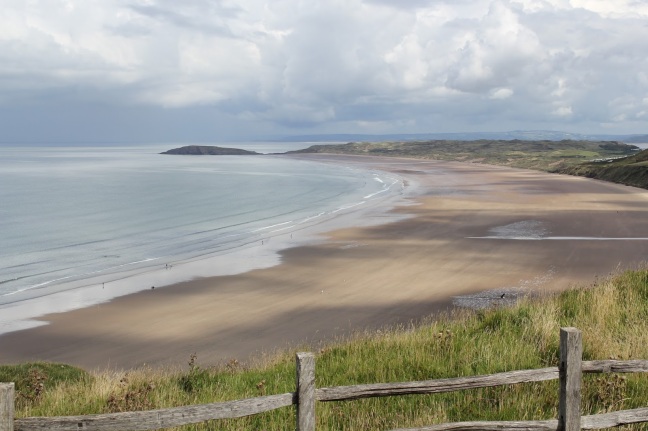 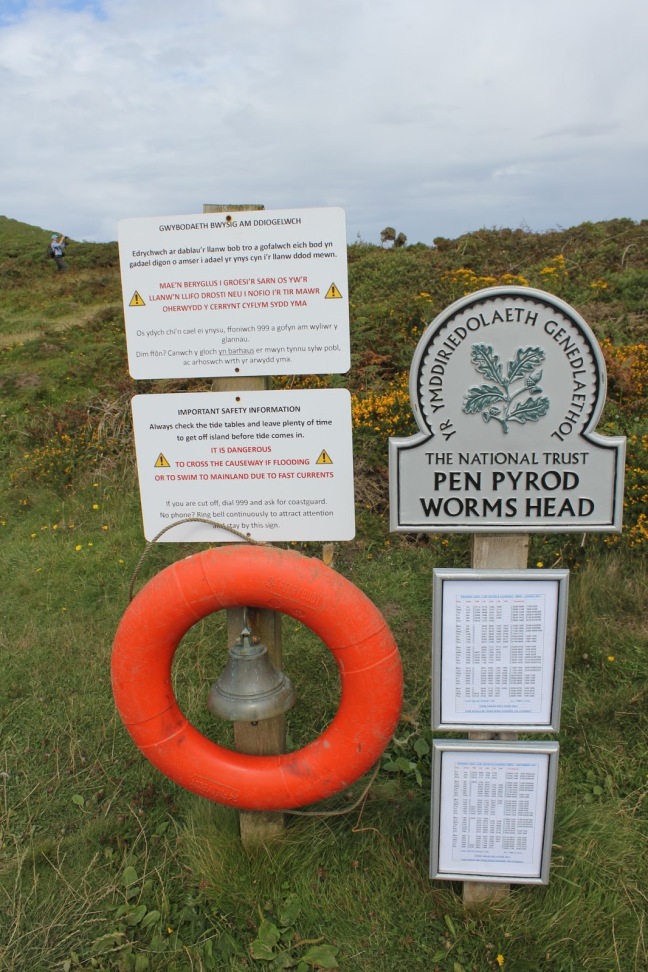 We bought sorbets and had a little look around the local gift shops before returning home to rest. To find out more about Worm’s Head have a look here. 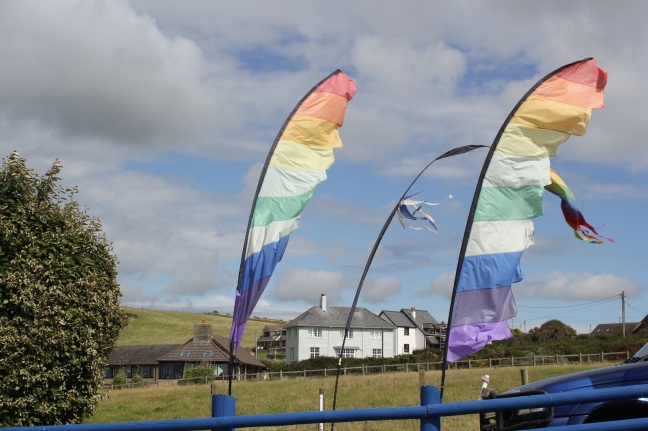 And that wraps up the Buswell family’s Welsh adventure!