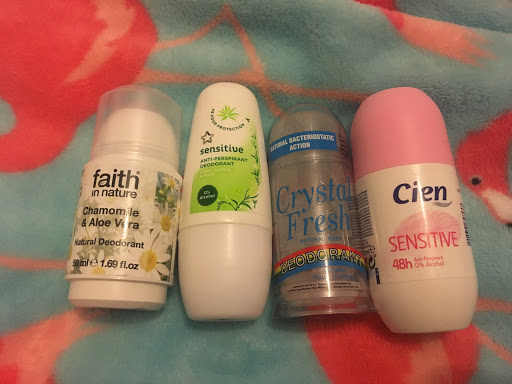 Well, that blog title is a bit of a mouthful isn’t it!? Instead of waffling on I will try and get to the point of what this post is going to be all about.

Since my lifestyle change, I have had to be more careful with the products I buy, the most obvious being the food I choose to eat. When it comes to food you can quickly establish whether its suitable for your to eat or not by checking the ingredients, but you wouldn’t think you’d have to check what was in your usual toiletry products.

It’s fairly normal for me to research companies in relation to their animal testing policies or whether they are vegan or not so I know if I will purchase them in the future. However, I hadn’t considered researching the individual ingredients to see what they really contain and in my search for some cruelty-free/vegan deodorants I found out some pretty interesting facts. 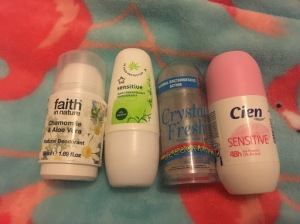 Firstly I wanted to stop using spray deodorants because the majority of people know that it is/was bad for the environment. Most aerosols are now safer than previous models, no longer containing dangerous CFS that harm the environment (source).  Sprays have also been reported to cause headaches, eczema, asthma and even fatal heart problems – you are basically breathing in compressed gas chemicals, so it’s not surprising. We can’t be completely sure of all sprays being 100% safe for the environment and yourself so I would advise roll-ons for a safer approach, but in the end it’s your own personal choice. I’m not forcing anyone to change their favourite deodorant, maybe try and find a similar alternative.

I have read a few articles and blog posts on natural/vegan/cruelty-free deodorants and I thought I would try some out of myself. It is great reading what other people recommend but on the other hand testing products yourself is the best way to really know what you like.

Faith in Nature are well known for their shampoos and conditioners which are often sold in Oxfam charity shops here in the UK. I had heard good things about the brand so I wanted in. I spotted this goodie in a local health shop which I have recently discovered near my work, I keep ending up there during my lunch breaks! I believe this was around £3 so not too pricey. It claims to be free from aluminium chlorohydrate, alcohol and parabens, made with natural ingredients and vegan society approved.

On first use, it was a little strange because it doesn’t feel like your usual deodorant because it is free from the normal nasties. I had to roll it a few times on each underarm because it felt like it wasn’t really applying properly, turns out it’s just not as wet and sticky as other roll-ons which is a good thing of course! It definitely lasts well throughout the day and is gentle and calming on the skin, it’s worth a try.

I used to buy the spray version of this antiperspirant but of course, sprays are no more (for me that is). This was the first roll-on I bought because it made sense I liked the spray so I might as well use the roll-on, one step towards a better lifestyle choice for me. Unfortunately unbeknown to me this antiperspirant contains aluminium chlorohydrate which is used in many deodorants to provide protection against wetness in the underarms. This may seem great but it also clogs your pores to stop odour rather than other natural methods, this is a barrier for naturally odour reducing bacterias that the skin produces.
I found all this after I bought the deodorant, so even though it is great for taking away for quick breaks to freshen up I think I’d stick to natural roll-ons in the future.

I bought this interesting looking deodorant from my local health shop because I was really interested in the concept of a crystal stick deodorant. Obviously, it isn’t like your usual deodorant stick because it is in a dry form. It is recommended that you use the crystal after you have showered so your skin is already wet and the deodorant can easily be rolled onto your underarms, if not you need to gently dampen the stick and use it as usual.
I haven’t reached for this as much as the other deodorants because it feels strange for me to use a crystal rock roll-on. However, when I used it for the first time I gave it a thorough test and applied it after I had a shower at night and got straight into bed. Now let me tell you I was amazed, I woke up after a pretty warm night (TMI??) and I didn’t even feel like I had sweat at all! 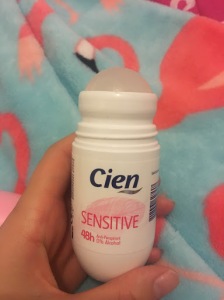 Cien is Lidl’s own brand range of skincare and cosmetics and I believe the majority are vegan and all Cien products are cruelty-free. Lidl is known for its reasonable prices and I often go there for groceries and it’s amazing that they have an affordable cruelty free range available too! This also contains the dreaded ingredient aluminium chlorohydrate but for a cheaper option, it is worth buying if you are desperate. I found when applying on my underarms it leaves them feeling quite wet and took a while to dry before I could put clothes on top, or I would risk marking my clothes. Despite that, it does last but I think 48 hour is a bit of a stretch!