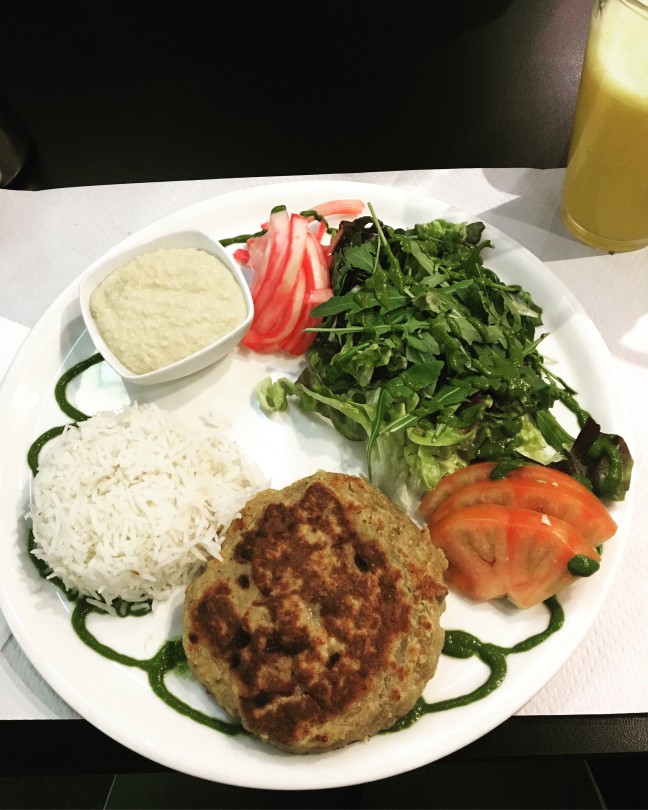 Yes, you read that right. Much to my surprise the vegan scene in Barcelona is on point and it is absolutely worth sharing with the internet, so you’re welcome.

I recently went on a gal’s trip to Barcelona with Faye, Romily and Sarah because we’ve never actually been abroad together plus we were desperate to escape the pretty average lives we all have in the UK (sorry girls). You bet I researched the hell out of the vegan restaurants and cafes as soon as we agreed Barcelona was the destination of choice. 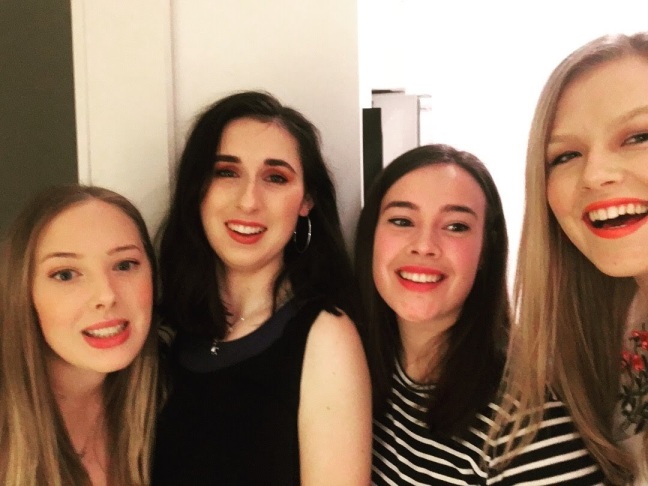 When it came to researching places to eat, this beauty was at the top of our ‘must visit’ list and damn we were not disappointed. Veggie Garden has two restaurants, one in Gran Via and one in Raval, both 100% vegan! 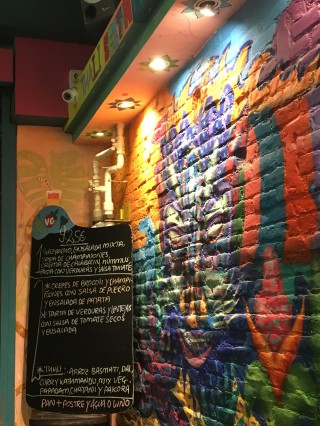 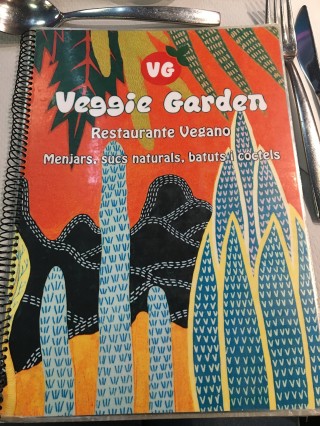 We liked the place so much we decided to visit twice, (also because Faye was feeling -2/10 so she needed to relive the experience) once on the Friday night we arrived and again when we were craving a much-needed pick-me-up Sunday lunch. Now to the food…

After a day of travelling, we were all feeling pretty pooped and were craving something relatively healthy yet delish on the first night in Spain, so we opted for Veggie Garden after a quick scroll of the menu online. I went for the tofu burger with rice, mixed salad and hummus. The second photo below is of Romily’s vegan af raw salad because she wanted all the veg and I believe Sarah had a roasted vegetable tart. It was a fairly light meal which was perfect considering we ate fairly late that night, so no food baby situations occurred after this meal and it was just the right amount of food! 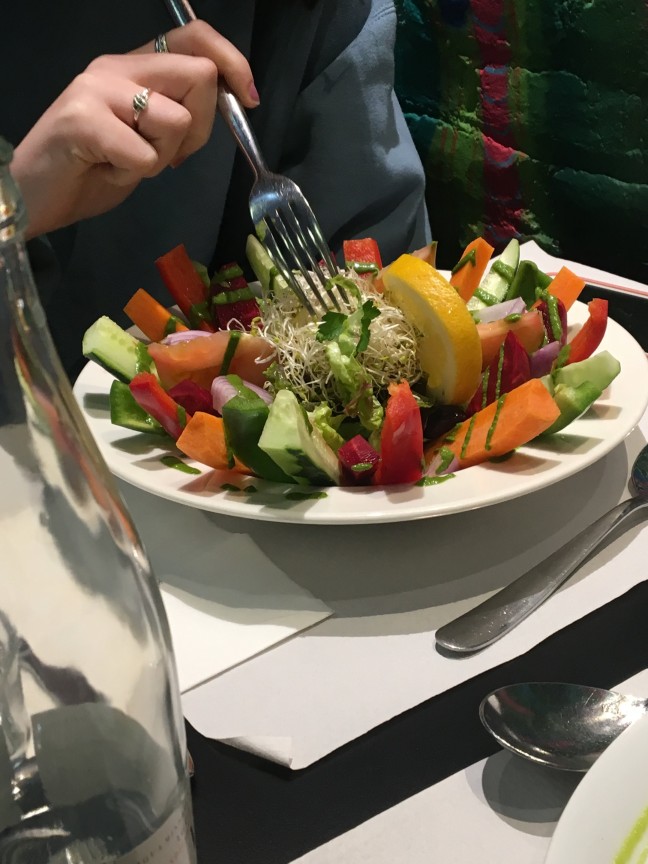 The four of us re-visited Veggie Garden for Sunday lunch and coincidentally had the same dish each. The restaurant has a deal that offers bread, a starter, a main course and dessert all for just 9 Euros each! There was a choice of 5 starters so we decided to go for two hummus dips (naturally) to share and the chef’s choice of tapas which turned out to be some delicious vegetable croquettes in a soy style sauce.

Now time for the main event – the second course gives you the options of choosing an item off the specials board or the thali, a combination plate traditional in India and Nepal with basmati rice, 2 types of veg curry, a dahl, chutney, a bhaji and papadams. The thali sounded like a winner so an easy choice for four hungry veggies. Finally, the dessert I went for one of my all-time favourites, an apple crumble and it was delish. Sarah had a sorbet which turned out be an unusual beetroot flavoured slush, so maybe avoid if you’re not used to unexpected ingredients! Romily went all out with a chocolate pudding which looked damn good, so high praises all around from us. 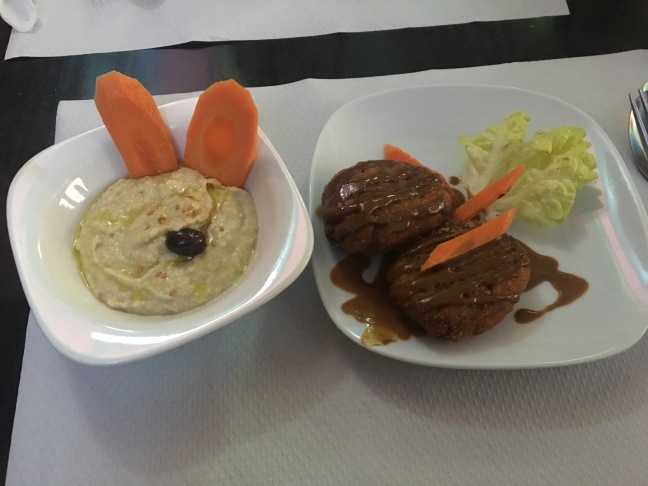 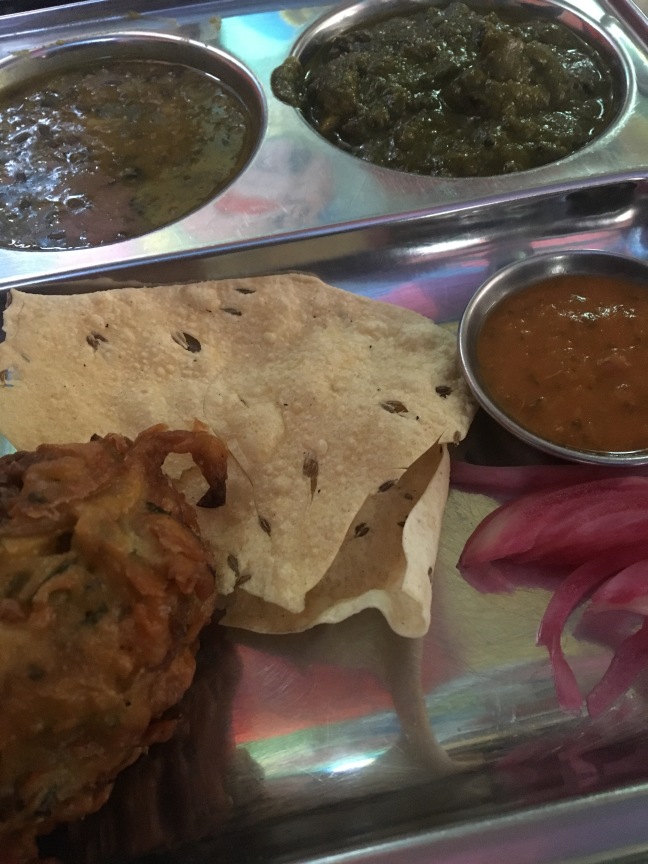 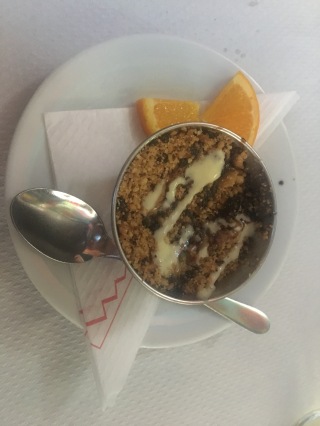 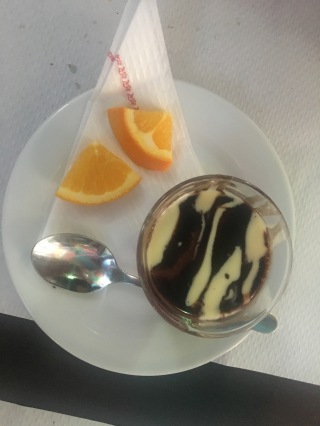 We didn’t really get to appreciate this little gem because we were in a hurry to get to our next tourist attraction. La Trocadero was a pit stop for us all to refuel before we ventured on through Barcelona. I wish we had had a while longer to sit down and digest our food rather than having to force down the burgers whilst queuing for the Sagrada Familia. 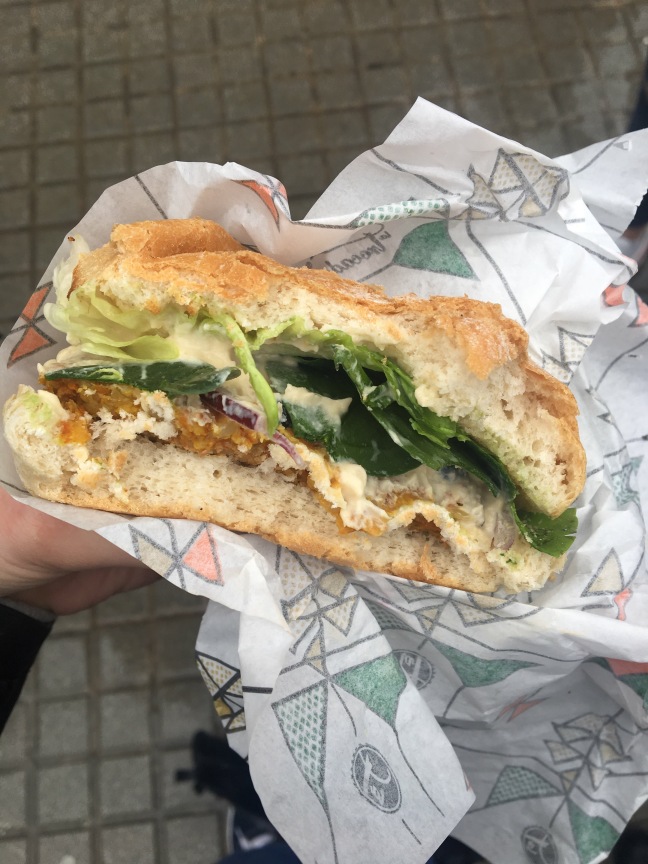 Yes, despite the rush I managed to take an arty and extra af photo of my food. My burger of choice was the ‘Falburger’ – a falafel burger with tomato, red onion, spinach, lettuce, olives, a spicy sauce and hummus. It was one of the best burgers I’ve eaten in a long time and now I’m desperate to try all the other goodies they had to offer. Faye and Romily had hot dogs, whilst Sarah had the ‘Setbacon’ – a burger made of mushrooms with vegan bacon, lettuce, caramelised onion, tomato and a curry style sauce.

When in Spain, you must have tapas and we were super excited to discover Barcelona has its own 100% veggie and vegan tapas bar! It seemed like a popular place to visit because we had to wait a little while before we got a table.

It was definitely worth the wait and we went to town with the tapas, I think the waiter was a little shocked how much four 21 year olds can eat! Brace yourself for the delights we feasted upon. We knew it was going to be good when we got a complimentary starter, the most divine sweet potato and coconut milk soup.

So let’s do a rundown on what we ordered…
First up on the table arrived some mixed olives, I’m not usually a fan but they weren’t so bad. The Padron peppers were green chilli peppers that had a spice mix and the Canarian potatoes came with two types of dips – I believe one was butternut squash? 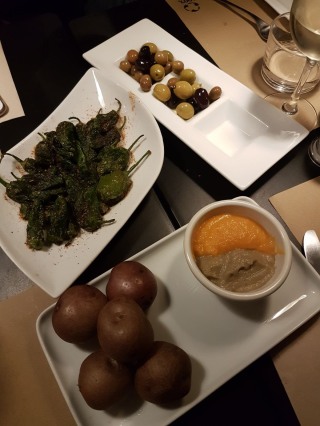 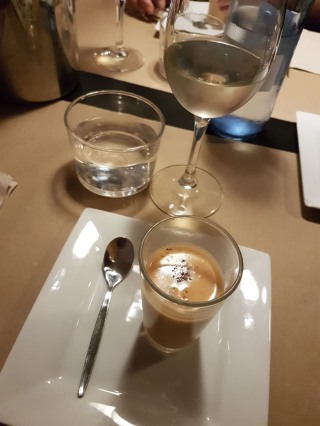 The girls shared some mushroom croquettes and fried rice balls between them because they weren’t vegan, there was plenty of food to go round so I definitely didn’t miss out. Next, there was a traditional Catalonian dish, ciabatta bread with a tomato spread/sauce on top, I can confirm they were top notch. The beetroot hummus served with carrots was our all time favourite tapas dish, I could honestly live off that stuff. 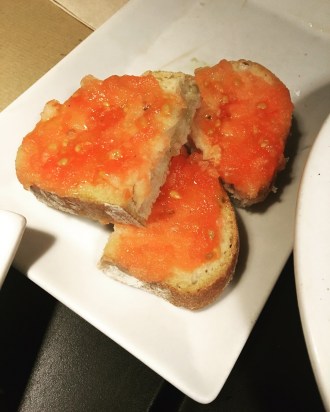 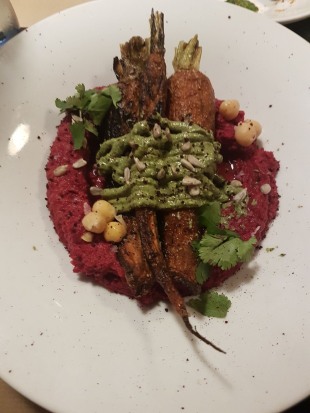 Yes, more food… the roasted aubergine and burnt onion came in next and by this point, I think we were all getting a bit stuffed! Not going to lie, the onion and aubergine aren’t exactly the prettiest pair, but they made up for it in taste. This was accompanied by grilled red cabbage and a Mediterranean veg topped ciabatta slice, literally food heaven. 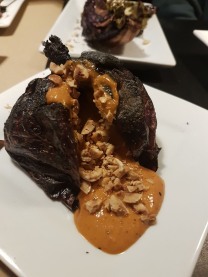 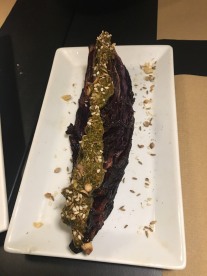 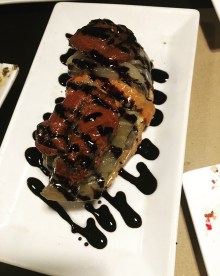 Dessert time! I was surprised to find they served a vegan chocolate dip with marshmallows (you heard me right) get in my belly! The girls had a non-vegan pud but it was too photogenic not to be in the blog post; feast your eyes (literally). 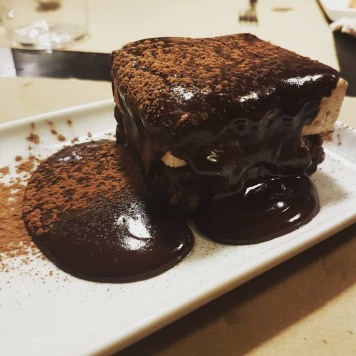 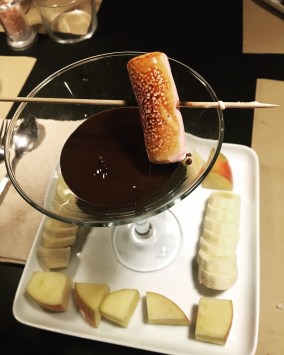 We were desperate for a takeaway pizza on our last night in Spain particularly because we were too lazy to cook or go out. Google is your friend when it comes to searching for good pizza places but when it comes to vegan and veggie pizza, happy cow is your bestie!

Okay, so mine didn’t have vegan cheese but the base and sauce were delicious enough for me to enjoy a good old vegan pizza, greens and all. Proof of how good the pizza was with a very happy Neneh B below. 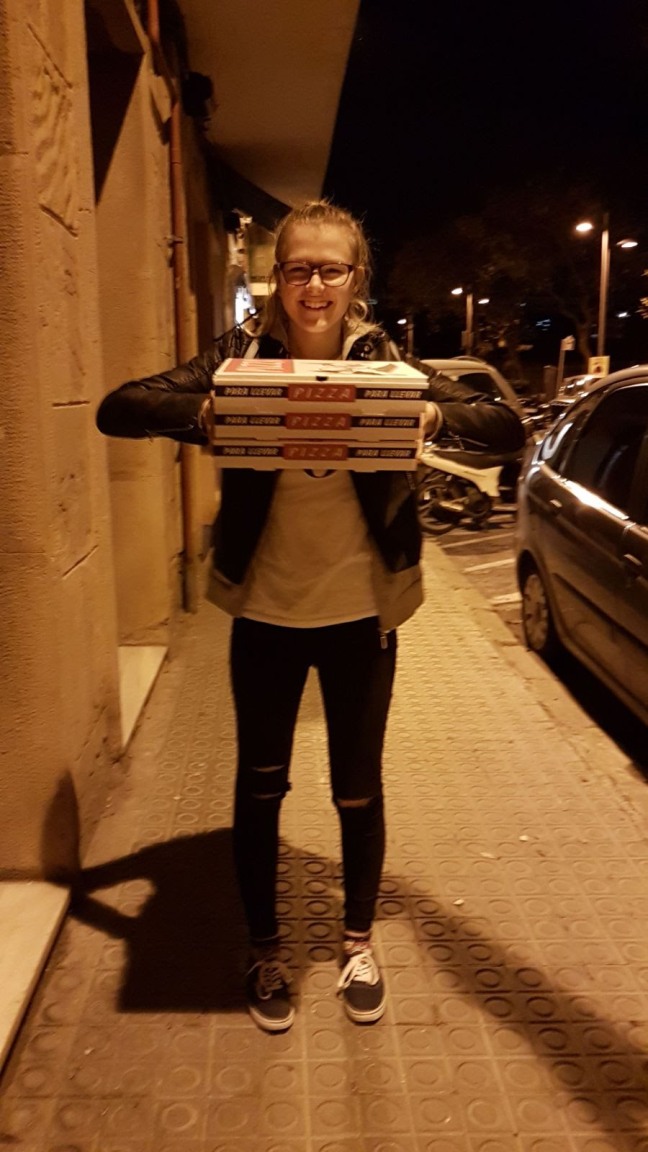 On our last day in Barcelona (cry) we decided we’d get up early and grab ourselves some breakfast on-the-go. Coincidentally a vegan-friendly croissant cafe was just around the corner from our apartment, so that happened.

Vegan croissants are bloody hard to come by and the fact that they offered a chocolate one made my day. They were a little sticky to eat but washed down with freshly squeezed orange juice, we were good to go! 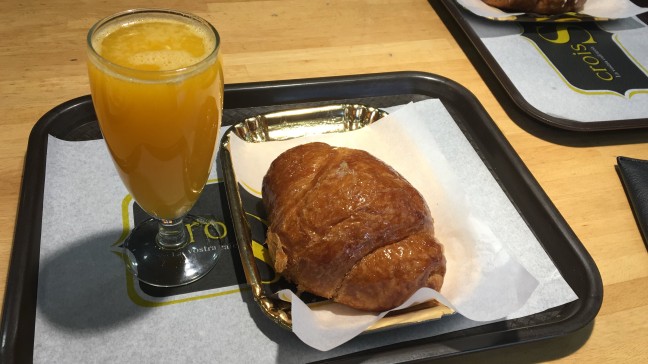