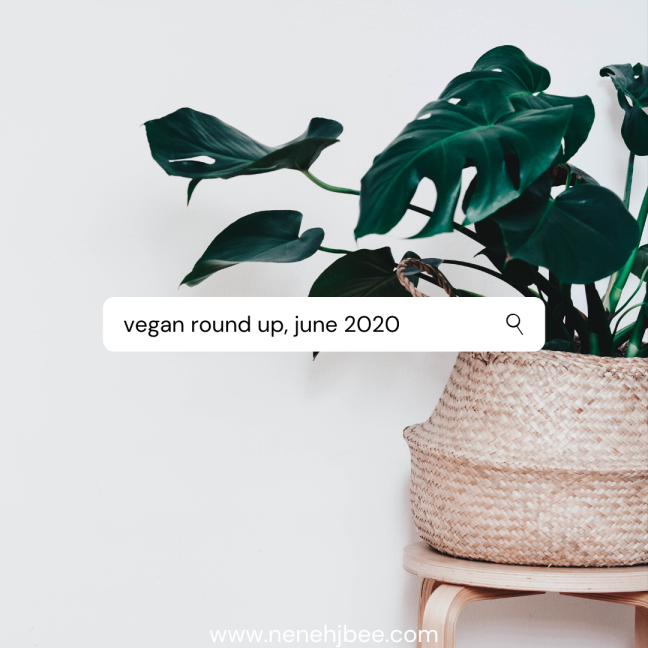 I thought it would be fun to kick start this lil series again because I’ve neglected it just a tad AND, a lotta vegan goodies have been launched across June.

Obviously, I can’t physically list all launches and exciting news from the past month, but I’ve listed some that aren’t worth missing!

Applewood Cheese
The king of all smoked vegan cheeses is launching a Vegan Christmas Cheese Board. Yes, with just under six months until the big day and Applewood has only gone and done it.  This will 100% be going straight in my basket (when it eventually turns up in supermarket this winter)!

Applewood have just announced this #vegan cheeseboard will be coming this Christmas 😍🎅🧀 ….. Below is what @applewood_cheese had to say will be included in the #vegancheese box 👇 New Vegan Launch is coming this Christmas. Set to feature: . 🧀AWARD-WINNING Applewood® Vegan 🧀NEW Ilchester® Melting Mature Cheddar Vegan 🧀NEW Ilchester® Blue Vegan Cheese Alternative (with blue spirulina vein) 🧀NEW Mexicana® Vegan Spicy Cheese alternative Follow us @vegan_food_uk for the latest vegan launches ⭐⭐⭐

Dominos
Apparently, Domino’s have been developing vegan pizzas for over a year now. If any OG vegans remember, back in 2018 they launched some in a few select stores and they weren’t received very well. Fingers crossed they have cracked it this time, just a shame the trialing stores this time are nowhere near me.

Pizza giant Domino's has revealed that it is trialing two new vegan-friendly pies in the U.K. and Republic of Ireland from today 🍕 The options – which include a Vegan Margherita and Vegan Vegi Supreme – will be available from 46* stores nationwide, via the brand's website and delivery app.⁣⁣ ⁣⁣ Aman Prasher, Domino’s chief vegan dough developer said: "Our vegan offering has been a while coming because we’re determined to make sure it’s full of our iconic Domino’s flavour. We might not be first but we’re always the best – no compromises.”⁣⁣ ⁣⁣⁣ Read the full story on plantbasednews. org or swipe up on our story👆⁣⁣⁣⁣ ——————————————————⁣⁣⁣ 🌱 🍔 Plant-based recipes, chefs & restaurants around the world: @pbnfood⁣⁣⁣ 👨‍⚕️👩‍⚕️ Plant-based doctors & health advisors: @pbnhealth⁣⁣⁣ 🥦🥕 Learn how to grow vegetables: @pbngrow⁣⁣⁣ 🏋️‍♀️ 💪Plant-based athletes, bodybuilders, and fitness tips: @pbn.fitness⁣⁣⁣ 🚂 ⛺️ Eco & Ethical Tourism: @pbn.travel⁣⁣⁣ 👄💄 Ethical & Vegan Beauty @pbn.beauty⁣⁣⁣ 📹 ▶️ YouTube: PLANT BASED NEWS⁣⁣⁣ ⁣⁣⁣ https://www.plantbasednews.org/lifestyle/dominos-launches-2-vegan-pizzas-u-k

Swedish award-winning plant-based brand Oumph! has seen a whopping 400% increase in sales in the UK the first four months of this year, compared to the same period last year! 🍔🆙⁠ ⁠ The Oumph! Burger, which was recently awarded Best Vegan Burger 2020 in the @veganfoodandliving Awards, also saw an increase in sales in ASDA of 30% during #NationalVegetarianWeek 🌿⁠ ⁠ Oumph! is available in Tesco, Asda, Holland & Barrett, Whole Foods Market and a number of independent stores across the UK. Let us know what your favourite @eat_oumph product is! 👇

🍔🍕The UK’s First Frozen Plant-Based Cheezeburger Pizza has landed!!⁠ ⁠ 🤤We are beyond excited to announce our most delicious (and most epic) pizza creation to date! The Meatless Farm Cheezeburger Pizza is the UK’s first plant-based cheezeburger pizza, and it's damn delicious.⁠ ⁠ You helped create it, and now, we've made it! @OnePlanetPizza’s classic fluffy base is topped with a chia seed-infused tomato sauce, layered generously with Smoky Vegan @Applewood_cheese, topped with caramelised red onions, sliced gherkins and juicy chunks of @MeatlessFarm burger before being drizzled with @MooshiesLondon famous Burger Sauce. ⁠ ⁠ A dreamy, drool-worthy creation. ⁠ ⁠ 👆Shop now on OPP Direct! Link in bio.⁠

M&S
The Plant Kitchen range at M&S is forever launching new products, this month includes some very exciting launches including Avocado Brioche Buns and Raspberry Ripple ice cream.  What a way to level up this year’s BBQ game!

Marks & Spencer will tomorrow launch Avocado Brioche Buns that are totally vegan! 🥑🥖🍔🌭 … Do you like the sound and look of these? It's fair to say that us #vegans have no shortage of #plantbasedmeats SO all we need now is some #gamechanging bread to put them in 😍 £1.15 for a pack of two hot dog or burger buns We told you that #veganBBQ season will just get better didnt we? @marksandspencerfoodpr have done really well with these! Well done x Follow @vegan_food_uk for the latest supermarket finds ⭐⭐⭐

ALDI Plant Menu
I am a massive lover of coleslaw so when M&S launched its own vegan version, I bought way too many pots. It’s nice to know there is a budget version of coleslaw (and potato salad), as spending 79p in comparison to £1.50 is definitely kinder to my wallet!

New Summer Sides at Aldi ☀️⛱🏖 … Ok the sun might be incredibly vacant at the moment, but @aldiuk are gearing us up for #veganBBQ weather again 🙌 The new products are: 💚Vegan Potato Salad 💜Vegan Coleslaw For the magic price of 79p each Well done to Aldi for all the launches so far this year, from their own Percy Pig type sweets to some amazing kebabs and burgers Great finds by the lovely @lillybvegan

The Body Shop
I’m definitely a fan of brands that are upping their sustainability game. The Body Shop has recently launched a range of Bath Bombs and Blends made from wonky fruit and veg, that would have otherwise gone to waste. A great way to make the most of the produce readily available here in the UK.

@thebodyshop is making a splash with its new a range foamy, fizzy and fruity vegan Bath Blends and bombs made from wonky fruit and veg. 🛀⁠ ⁠ Ensuring that food waste is put to good use, the Bath Blends (£8) are made from second choice wonky bananas and pears, and strawberry and mango seed oil from the juice industry. Choose from four fruity flavours including Pear, Berry, Mango and Strawberry. 🍓⁠ ⁠ If you love nothing more than soaking in the tub with a bath bomb fizzing away then you’ll love the Fizzing Animal Bombs (£4). Shaped like iconic species from around the world, you can choose from four refreshing nature-inspired scents.⁠ ⁠ Click the link in our bio to read the full article. ☝️⁠ _________________⁠ ⁠ #veganism #vegansofig#instavegan #veganlife#veganlifestyle #veganliving#justvegan #vegancommunity#vegan #ethicalvegan #crueltyfree #ethical #veganbeauty #crueltyfreebeauty #ecofriendly #veganbeauty #leapingbunny #vegancosmetics #veganmakeupshare #thebodyshop #crueltyfreecosmetics #vegnews #vegannews #veganlove #bestofvegan #bathbomb #bubblebath #bathtime

Squeaky Bean
Now, this is very exciting, especially for those who cba to make a vegan omelette from scratch! This ready-to-eat potato & onion tortilla is available in Sainsbury’s and is the first of its kind in the UK. I remember having the non-vegan version many a time when I was younger, so I’m happy there is a readily available vegan version on the highstreet.

The perfect new vegan product launch for #veganuarychickenweek! 🤩 In a first for the UK, @squeakybeanveg has launched a ready-to-eat plant-based version of a classic egg-based dish – Potato and Onion Tortilla! YUM! 🌱⁠ ⁠ See, we are telling the truth when we say there is a vegan version for (almost) everything! The tortilla will be available in Sainsbury's nationwide today! As soon as you try it let us know what you think! 😋⁠ ⁠ ⁠

Stay safe and until next time,
Neneh x

Have a read of my previous round up from last February.